Eien Strife To Perform at DerpyCon 2014 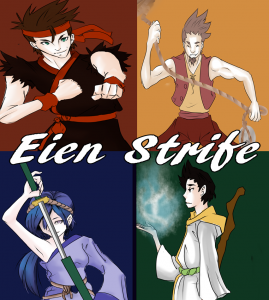 Since the their first time on stage in 2011, the four heroes of the cosplay adventure rock band have been touring conventions all over the United States while putting a brand new concert every time! It’s hard to explain everything that you will experience when you attend an Eien Strife concert. With high energy songs, catchy dance breakdowns, hilarious 8-bit animations, and crowd interactions like never before seen, there is something for everyone at an Eien Strife show. Since the release of their full length album “Full Speed Ahead”, the performers have sold thousands of copies at their shows and have recently recorded a new single with the well-known voice actor and musician, Todd Haberkorn.

For more information and news about DerpyCon 2014, go to https://derpycon.com.