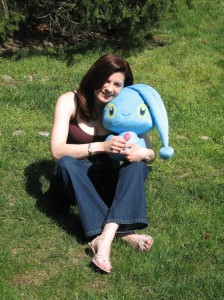 Michele is the voice of Jessie in “Pokémon,” Hajime Yagi in “The World of Narue,” Takako Kawashima in “Shootfighter Tekken,” Matsumoto and various characters in “To Heart,” Razali, Cindy, Greta, and The Fairy in “The Third,” Ogiue Chika in “Genshiken,” Koyuki Asagiri in “Kujibiki Unbalance,” Chou’un Shiryuu in “Ikki Tousen,” Tomoe and Airi in “Queen’s Blade,” Potaru Tanaka and Inumi in “Magical Witch Punie-Chan,” the Pokémon Trainer, Squirtle and various other Pokémon for the Nintendo Wii’s: “Super Smash Bros. Brawl,” Piplup and many others in “PokéPark Wii – Pikachu’s Great Adventure,” Snivy, Piplup and many others in “PokéPark 2 Wonders Beyond,” various characters in “Heathcliff the Fast and the Furriest,” Alisa Bosconovitch and Roll in Capcom’s “Street Fighter X Tekken,” Grace in “Castle Dracula,” Lucky and various others in “Gangstar Vegas,” and Lilliel Saotome in NIS America’s “The Guided Fate Paradox.”